Part 3 of my trip to Indonesia took me to the city of Yogyakarta or Jogja (Read Part 1 – Mt.Bromo and Part 2 – Uluwatu).

The name of the city might sound familiar to Indians as it means ‘A city fit to prosper’. Yogya – Fit/Capable/Suitable and Karta – Prosper/Flourish. I was constantly amazed at the extent of influence of Hindu cultures/traditions/languages in Indonesia and this was another fine example.

After our trip to Mt. Bromo, we took a cab to Jogja. We booked our accommodation at a pretty cheap place (pic below). The rooms were super small. However, it was well located in the city and being students on a tight budget, we had no other option. 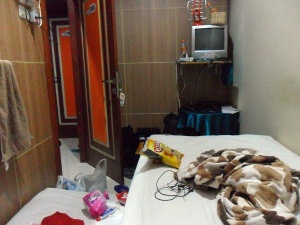 Our first stop was Borobudur. It is a 9th century Buddhist temple and a UNESCO world heritage site. Borobudur is about 50 km from the city centre. We left the hotel early and took a bus to the site. There are dedicated bus services to the monuments, though it might be hard to find the right one. Thanks to Victor, I never had that problem.

The ticket cost for foreigners was 20 USD and we had to get a sarong which we wore it over our jeans. As we got out of the ticket office, the view was breathtaking. Being mid February, it was foggy and slightly chilly. 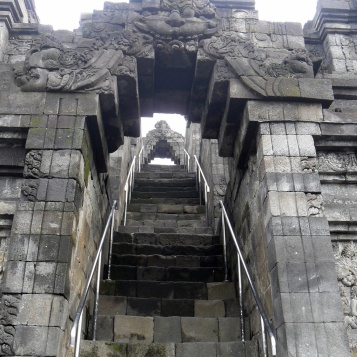 The monument is divided into 4 – 5 levels and the top was covered in fog when we arrived. The temple consists of more than 500 buddha statues seated inside as many stupas.

It was a serene experience and we spent an hour or so walking around the temple. By the time we finished, the fog lifted. We then made our way to Prambanan.

The other important landmark in Jogja is Prambanan – a 9th century Hindu temple dedicated to Trimurti (Brahma, Vishnu and Shiva depicting Creation, Maintenance and Destruction). Same as Borobudur, we had to wear a sarong before entering the temple premises.

Apart from the Trimurti, the temple is host to various other Hindu idols including various Vahanas (Garuda and Nandi), Durga Devi, Lord Ganesha etc. It was a fascinating sight to see the idols and to explain the significance to other tourists. In the picture above, you can also see shiva lingas lining the entrance to the temple.

Even though Jogja wasn’t in our plans, it was worthwhile to take the trip and visit the city. Apart from these famous landmarks, we also walked in the streets to experience the hustle and bustle of a large city.

Overall, it was a memorable trip.

Check out my other blog visits to Indonesia – Read Part 1 – Mt.Bromo and Part 2 – Uluwatu. In my next post, I will share another Indonesia trip blog – a day trip to Tanah Lot.

Join 167 other followers
Follow A reluctant wanderlust on WordPress.com